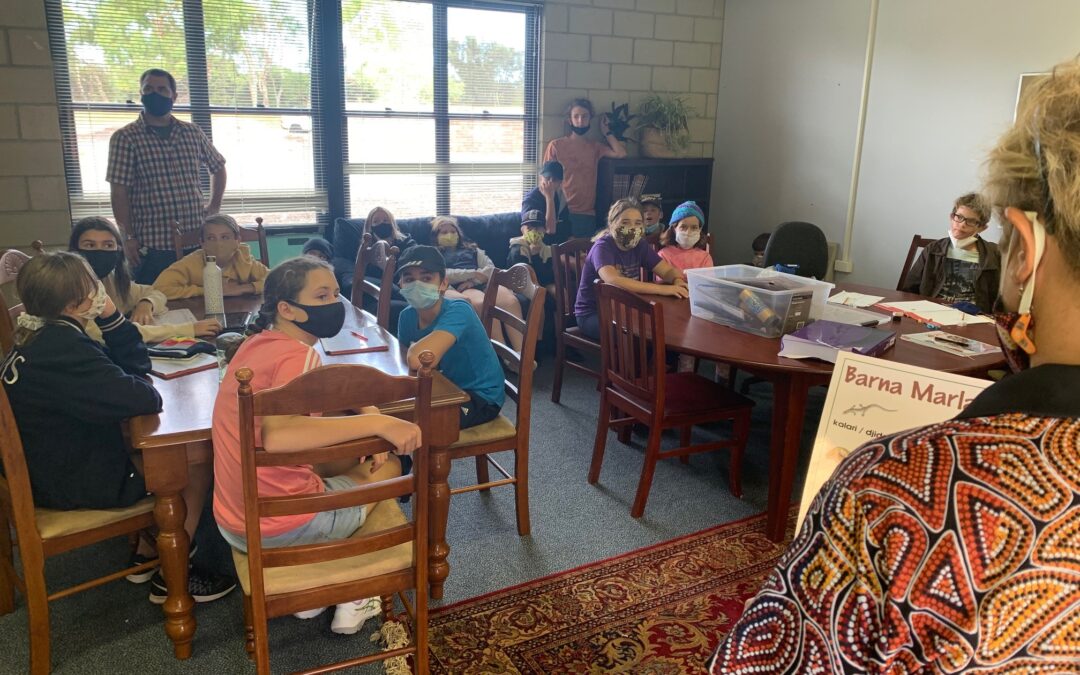 Kaya, wandjoo to 2021. On Tuesday 9 February, the children from the Adolescent Program’s new sub school participated in a yarning circle lead by local yorga, Tanya Bennell. Tanya had been invited along by Vanessa to help us choose a name for the advisory’s and the new sub school. With the expansion of Rockingham Montessori School, it was decided to branch out from the sea creature theme before a group became the blob fish!

Firstly, Tanya asked the children, in Nyoongar, to come closer and form a circle; the children were very responsive. She then introduced herself in the customary way by explaining her moort (family) connections, and the boodjar (land) they are connected to.

Tanya shared the Nyoongar creation story of the Waugal, the rainbow serpent and how he shaped the geography of the south west of Western Australia (many other Aboriginal nations have similar stories). Kura (long-ago) the earth was flat and featureless until the Waugal woke from a deep sleep and set out to search for his ancestors. As he moved above and below the earth, rivers, valleys, hills and lakes were carved into the landscape. At significant locations the Waugal rested, laid eggs, surfaced or descended underground. These sites are still recognised and honoured by Nyoongar people today. Tanya relayed the significance of Cooloongup, Walyungup and Richmond lakes, which are part of a coastal and inland chain running from Rockingham to Joondalup. Many Nyoongar people believe the Waugal keeps the waterways clean, which in turn supports the health and diversity of the flora and fauna in the area.

As a part of the naming process, Tanya introduced children to the Nyoongar names for many djerap (birds) and barna marlak (bush animals). Many discussions ensued about possible animals and birds before they were asked to decide. Bush animals was the overwhelming winner and hence the second sub school have been named Barna Marlak. The next task, which reconvened in the classroom, was to brainstorm bush animals. This was done so well that too many options were presented! These were whittled down to a top six – koobalong (frogs), yonga (kangaroos), kara (spiders), noorn (snakes), yoorna (blue-tongue lizards) and  dwert (dog). The children broke into groups to begin researching the characteristics and habits of one of the animals which they presented at Community Meeting later in the afternoon. As a result there were three main contenders but the yongas were not destined to be so choose between the two most favoured animals – the noorn and koobalong. Despite some contestation between advisory’s it was soon finalised: The Hammerheads were renamed the Koobalongs and the new advisory, the Noorn were born.

We are very grateful to Tanya for sharing her knowledge and expertise, to Vanessa, Tony and to the children for embracing the naming ceremony and making positive and constructive contributions. We are excited to be a part of Barna Marlak.